Known to Native Americans as the "Shining Mountains" and the "Backbone of the World", Glacier National Park preserves more than a million acres of forests, alpine meadows, lakes, rugged peaks and glacial-carved valleys in the Northern Rocky Mountains. Its diverse habitats are home to over 70 species of mammals including the grizzly bear, wolverine, gray wolf and lynx. Over 260 species of birds visit or reside in the park, including such varied species as harlequin ducks, dippers and golden eagles. The landscape is a hiker's paradise that is traversed by more than 750 miles of maintained trails. Glacier Park's varied climate influences and its location at the headwaters of the Pacific, Atlantic and Hudson Bay drainages have given rise to an incredible variety of plants and animals.

The park is named for its prominent glacier-carved terrain and remnant glaciers descended from the ice ages of 10,000 years past. Bedrock and deposited materials exposed by receding glaciers tell a story of ancient seas, geologic faults and uplifting, and the appearance of giant slabs of the earth's ancient crust overlaying younger strata. The result of these combined forces is some of the most spectacular scenery on the planet.

In 1932 Glacier National Park and Waterton Lakes National Park, across the border in Canada, were designated Waterton-Glacier International Peace Park. This designation celebrates the longstanding peace and friendship between the two nations. Both parks have since been designated International Biosphere Reserves and together were recognized in 1995 as a World Heritage Site. Clearly this resource is deserving of world-class recognition. 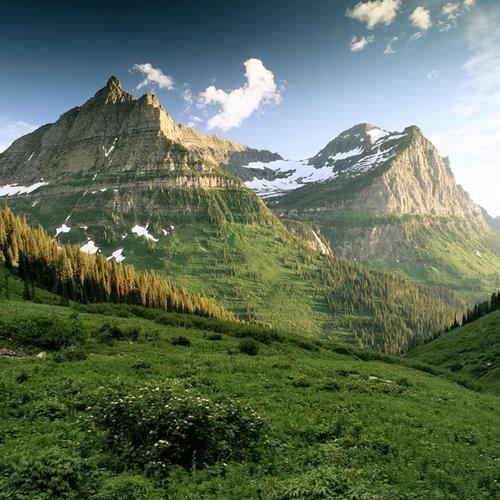